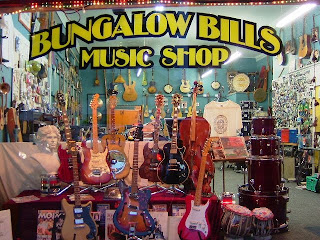 Over the years many people have sat down to tell the story about a icon and mentor in the music biz, but I'm gonna tell my side from my tale that has been lucky enough to interweave with his and the shop that brought myself and so many like us together. The man is Bill Lattimer and the shop as it stands today is Bungalow Bills.


On an after thought, heres a story i was told in Los Angeles back in 04.

I had a lay over before returning home after a 3 month tour with steriogram in theUSA and i headed into The Guitar Centre to try pick up a fender jazzmaster i'd seen a month earlier, the only colour they did that year was a cherry red that was horrible , but i was resigned to paint it, I was only shopping there as i had a discount with the band i was touring with. We got talking and he said he could maybe freight one out. After he learnt i was from new zealand the sale sguy remarked he had holidayed out here years before and loved it, but went to a music store called the "The Rock Store " or something and had been offended when the salesman wouldn't let him try a paul reed smith hanging unless he was a serious buyer, and had the cash. he declined the offer and walked out , unknown to fact was the guy is a close friend of Paul reed Smith himself and used to work for the company, he was totally put off by the smug approach he'd had at the shop and the next day he found a crazy little store full of cool guitars and run by "a crazy englishman" I stood listening without a word and then told him thats where i worked part time and had gr
own up. he went on and on about that shop and meeting bill and saying what a cool guy and what a cool approach he had, the total opposite of his other experience. And I was stoked to know this guy had left new zealand with that great experience, so great he shared the story to this stranger
http://bungalowbills.com/index.php
Posted by Second Hand & Used Guitars on Bungalow Bills Blog at 8:05 PM No comments:

Second Hand & Used Guitars on Bungalow Bills Blog
information on buying a used or new guitar,are the type questions i love to answer. type/size/steel or nylon/full size,or dreadnought?i can help